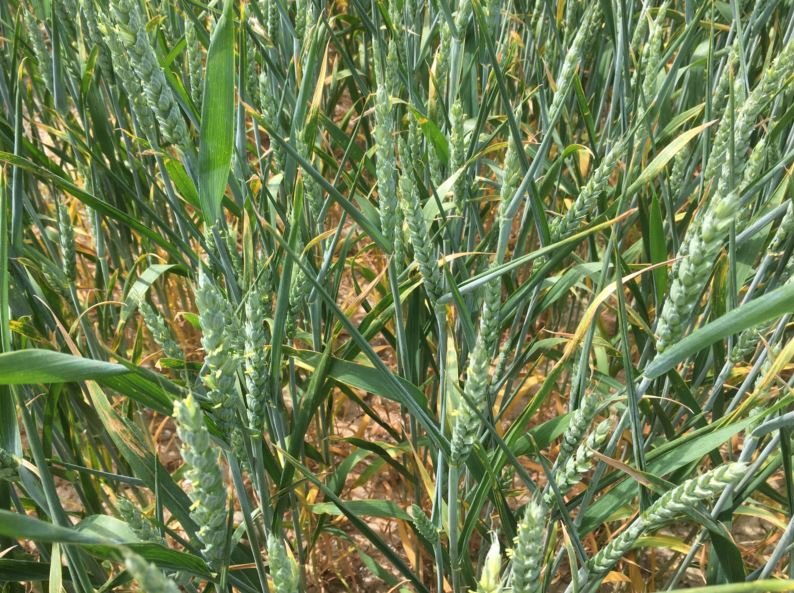 The effect of the current drought on winter and spring crops, mostly on the eastern side of the country, is likely to similar to that experienced in 2018.  An article published by Maynooth University states its the driest spring in Dublin since records began in 1837

Crops in the south are more promising but still need more rain to fulfil their potential.  Some of the most severe impacts of the drought include

Possible crop impacts of the drought.

Winter wheat crops are at heading out stage with many starting to flower. Drought stress is common in many crops especially in the midlands and the north east. Later planting of most crops coupled with relatively poor growing conditions over the winter period hasn't helped root development and thereby further reduces crops resilience to cope with moisture stress.  Decisions on head fungicides will have to be made in the coming week.

All spring barley crops are in need of moisture but crops in mid and north Leinster are under the most stress following record low rainfall in April and May. Drought stress has caused many crops in this area to head prematurely which will have serious consequences for yields of grain and straw. Crops further south are fairing a bit better due to higher rainfall in the critical period in April and May but are in need of rain as they approach awn emergence.

It is important to assess all crops’ yield potential before applying remaining fungicides. In situations where crops are suffering from drought and have headed prematurely a final fungicide application is not warranted but crops with higher yield potential need protection from disease especially ramularia but the spend on fungicides should be appropriate to the disease risk and yield potential of the crop.

Crops have jumped through growth stages over the last few weeks with many crops now approaching booting to head appearing. In general most varieties are very clean although there have been reports of mildew in Barra at low levels.

In common with all spring crops beans are in need of moisture. Start of flowering is the normal timing for the first fungicide on beans but the recent dry weather has greatly reduced the risk of disease particularly chocolate spot. Previous Teagasc fungicide trials on beans do not give a yield response to fungicides in dry seasons.

Most spring wheat crops are at flag leaf emergence. In common with all spring crops, spring wheat is variable across the country and in need of rain. Any remaining nitrogen should be applied in the next few days. Like all spring crops disease levels are low due to dry weather but it is important to be vigilant to yellow rust. Spring wheat and in particular spring sown winter wheat varieties are more susceptible to yellow rust.

Crops are now starting to enter the rapid canopy growth phase, they have recovered well from the frosts a number of weeks ago, but in the main growing areas crops are starting to suffer from drought where irrigation is not available.

Many grass weed species are heading out now or are actually flowering so this is a good chance to identify and assess the problem on farms. Different grass weeds will have different management strategies so accurately identifying the species is critical to controlling the weed in the future.

Complete the Grass Weed Survey Now  (it takes about 10 minutes!)

The loss of key herbicides in our main tillage crops has been compounded by the over-reliance on the few existing herbicides, which is causing the rapid evolution of herbicide resistance in a range of grass and broadleaf weeds.

In Ireland, resistant-weeds, especially resistant-grass weeds are more widespread than we would think. For example, herbicide resistance testing of wild oat samples collected across main tillage areas prior to 2019-harvest, suggest that 25%of fields. where wild oats were found pre-harvest, had some herbicide resistant plants within their wild oat populations’  . In addition, suspected resistance in sterile brome to ALS-mesosulfuron, and high likelihood of ACCase/ALS resistance in black-grass threatens Irish tillage farming. With anticipated ban on glyphosate in 2022 further aggravates weed challenges, adversely impacting entire agri-food sector. Thus, there is a need to re-think and re-evaluate growers’ herbicide management strategies.

The Teagasc-led ‘Enable Conservation Tillage (ECT)’ has launched an important online survey (accessed via https://teagasc.limequery.com/496775?lang=en) to assess growers’ awareness of herbicide-resistant weeds as well as adoption of resistance management strategies.

The survey will answer the following questions:

Please feel free to forward on the survey details to any farmers who would be interested in completing the survey.