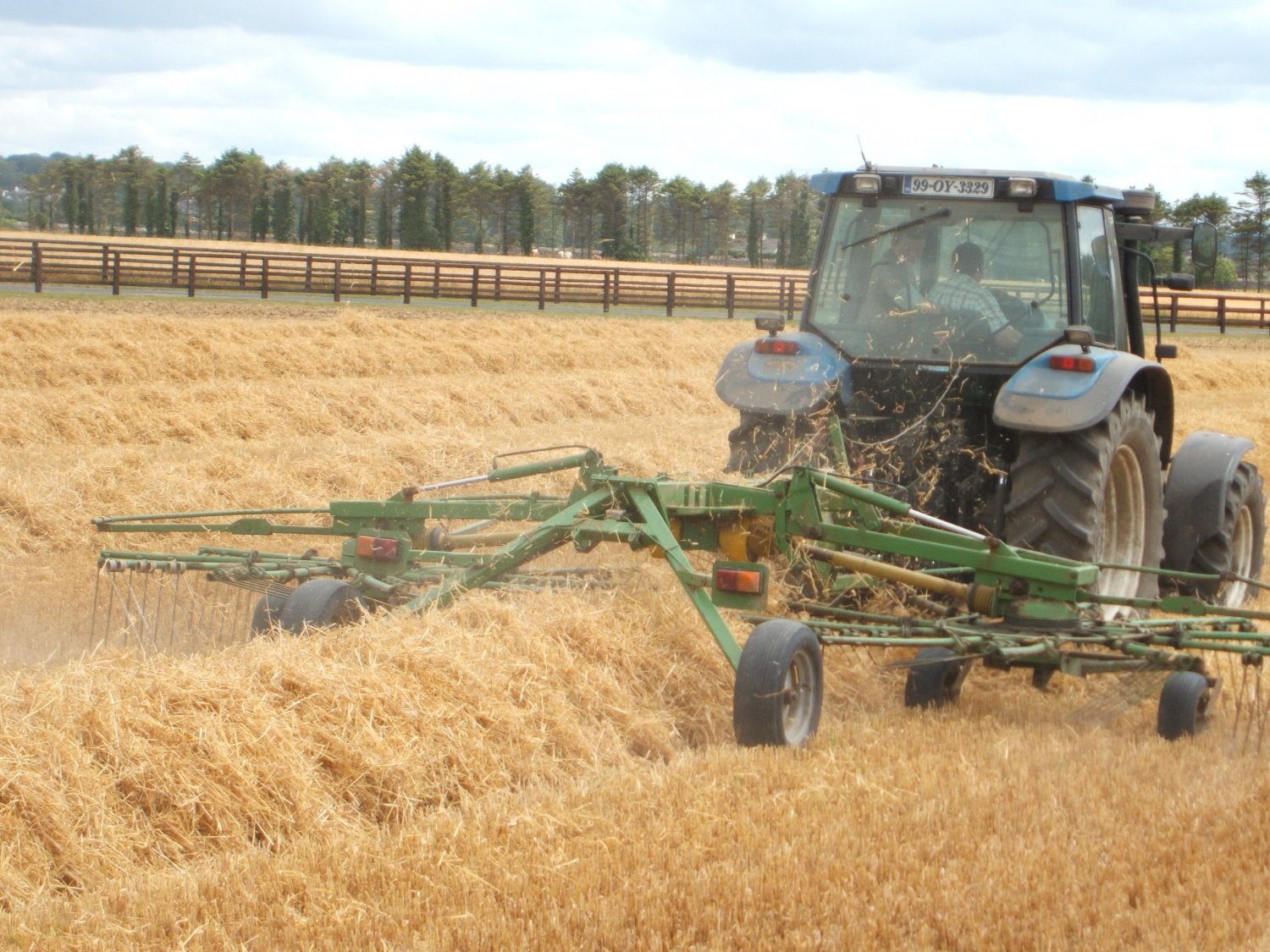 The estimated area grown for cereals dropped slightly from 267,000 hectares to 265,000 hectares this represents less than 1% change year on year. The area of winter cereal crops in total declined by approximately 40% due to the poor weather last autumn.  However the area of spring barley increased dramatically in 2020 to 141,000 hectares, up from 94,000 ha in 2019.

Many growers were forced to plant winter crops quite late and in poor conditions in the Autumn of 2019.  These poor seed beds were further waterlogging  over the winter and reduced plant numbers significantly which limited their yield potential.  Indeed many areas were forced to replanted these poor crops with spring cereal crops.

While spring crops were by and large planted into ideal seedbeds, drought conditions in April and May had a significant impact on crops especially in the midlands and north east. Dublin airport recorded only 21 mm of rainfall for April and May, which is one of the lowest  on record.  This drought had many effects on crops from reducing establishment rates to crops losing tillers, premature senescence and finally following a wetter spell in June , a significant amount of secondary growth occurred in many spring crops coming up to harvest. This led to issues with quality and  grain moisture levels at harvest.  Disease levels in all crops were low this year.

The early part of the harvest progressed relatively well, but broken weather in August with two storms, Storm Ellen (wind) on August 19th and storm Francis (rain) August 21st experienced in the southern half of the country, delayed harvest by up to two weeks. This resulted in significant grain losses in some crops while quality also suffered. There was also a large variation in the moisture content of grain this year with early harvest winter barley cut at 14-15% while late harvested wheat was cut at or above 20% moisture content with  some cut at 25% moisture content. Straw baling also was delayed with most crops having to be turned prior to baling, the scarcity of straw in all crops resulted in practically all straw being baled.

1Preliminary DAFM figures
* Data taken from www.cso.ie
** Teagasc yield estimates. Totals may not agree due to rounding-off.
$ Yields X Utilisable Area (Area x 0.95).  The yield figures are given on a “green” (as harvested) basis.

The area of winter barley decreased by 38% to 51,331 hectares as a result of the difficult sowing conditions in October 2019. Rhynchosporium was evident early in the season but overall disease levels were low. Chlorothalonil was available up to May 20th which helped in the control of ramularia. BYDV was not an issue in 2020. Average yields were 8.28 t/ha which decreased from 9.4 t/ha in 2019. Drought in April and May has a significant effect on yield especially in the midlands and north east and as a result average yield was 0.5 t/ha below the 5 year average of 8.8 t/ha. Grain quality was good at 64.5 kg/hl with average harvest grain moistures at 18.3% MC.

There was a significant decrease in winter wheat plantings in autumn of 24.4% to 35,331 hectares compared to 2019. While some crops failed to establish and were replanted in the spring most were left intact despite many fields having bare areas within them, this was particularly a problem in the north east. This no doubt this had a significant impact on the overall yields per field, even though the areas which were harvested in many cases performed quite well.

Crops in the south performed well during the spring as there were no drought effects and had good yield potential i.e. in excess of 10 t/ha in many areas however some were damaged by storms in August which caused infield losses (up to 10% in some cases) with heads falling onto the ground before harvest. Crops in the midlands and north east suffered the worst extent of the drought in April and May which, combined with poor establishment, resulted in lower yields. Overall there was a big variation in wheat yields for all the reasons outlined with the average national yield of 8.66 t/ha, which is below the 5 year rolling average of 10 t/ha and the lowest yield since 2012.

Similar to winter wheat and barley the area of winter oats drilled decreased from 16,600 hectares in 2019 to 8,260 hectares in 2020 a decrease of 50%. Disease levels in the spring varied across the country with drought affected crops showing little or no disease throughout the season, while crops in the south and north of the country had moderate  to high levels of mildew and some crown rust. This was also reflected in the variation in yields with drought affected crops in the midlands and north east performing below average while those in the south and north performing best. The average yield of 8.2 t/ha is lower than 2019  (8.9 t/ha) but higher that 2018 (7.9 t/ha) when more of the country was affected by drought.

Winter oilseed rape area increased slightly by 2% up to 8,673 ha. Most crops were drilled in good conditions, established well, had good root structure and consequently grew well throughout the winter. Early in the year there was very little evidence of pigeon grazing and so most crops had a good Green Area Index (ratio of leaves to ground) coming into spring. Crops began to flower towards the end of March and benefited from the dry sunny weather in April and May. Oilseed rape tolerated the worst extremes of the drought probably due to the good root structure and few if any showed signs of drought stress. Crops were harvested towards the end of July with some growers reporting yields in excess of 5 t/ha, however the average for the country was approximately 4.5 t/ha. The average moisture content at harvest was 11.1% MC.

There was a significant increase in the area of spring barley in 2020 as a result of lower plantings in autumn 2019. The area increased by 46% to 141,208 hectares which was the highest area of spring barley since 2014 (155,600 hectares). Disease levels were low overall. Drought in April and May had a significant impact on growth and development.  Crops badly affected by the drought started to regrow after rains in June and produced green tillers and grain coming into harvest especially in the Leinster region.  Although problematic, these later developing grains contributed in a small way to the overall yield.

Average yields in 2020 was 7.11 t/ha which almost 1 t/ha below yields in 2019 and slightly below the 5 year average of 7.2 t/ha. Counties in the north east, which had a larger than normal area of spring barley, were most effected by the drought. Exceptional yields (8.5 t/ha +) were recorded in some earlier harvested crops in the south but storms Ellen and Francis in August caused significant damage to spring barley in the south and as a result very few farmers harvested standing spring barley crops after the storms. Grain moisture averaged 19.4% with average hectolitre weights of 62.2 kg/hl.

The was a large increase in area (202%) which came from a low base of 3,716 ha in 2019 to in 11,492 ha in 2020, as growers sought a replacement for winter wheat not established or planted the previous autumn. There were no major disease issues during the season.

The area of spring oats increased significantly to 17,004 ha in 2020. This is almost a 10,000 ha increase from 2019 and compensated for the reduced area sown in autumn 2019. Establishment was excellent and foliar disease levels were moderate.

Drought had an impact on the crop and green grains were common at harvest. The storms in August also impacted on yield and grain shedding was common at harvest. Average yield was 7.15 t/ha which is 0.55 t/ha lower than 2019 (7.7 t/ha) but is equal to the 5 year average of 7.1 t/ha. Grain quality averaged 53.8 kg/hl, with harvested grain at 18.4% moisture content.

The area of spring beans increased to its highest level since the introduction of the protein payment in 2015. The area of 12,606 ha in 2020 represents a significant increase on 2019 (6,483 ha) and almost 600 ha higher than the previous high in 2017. Lack of crop options, suitable planting weather in March, protein payment and good forward prices offered by the trade were all factors in the increased area.

Crops established well but drought had an impact on yield in many counties. Some of the higher yields recorded came from early sown crops that were well developed in April and May. Disease also impacted on yield were chocolate spot was evident in the south and rust was an issue along the east coast.

Straw quantities were substantially lower in 2020 than 2019. In drought affected areas straw yields were up to 50% lower than normal, winter barley straw yields were particularly badly affected in these areas, winter wheat and oats straw yields were also lower but not as badly affected. Spring cereal straw yields were also lower, again drought affected areas were worst hit. However all spring cereal crops had some level of green straw from secondary growth in them at harvest time. This made the baling of spring cereal straw more difficult as this straw had to be left on the stubble for a number of days before the moisture levels were low enough for it to be baled. In most cases the broken weather at harvest time compounded this problem and it was common for straw to remain on the field for a number of weeks before being baled. Towards the end of the harvest some growers opted to chop low value straw such as oaten straw.

While the yield of straw was much lower overall in 2020, this did little to drive straw price. It was difficult to get prices at and during harvest as many buyers seemed happy wait and see how the market progressed.  Demand and prices in the past few weeks have reached expected levels.  Overall income from straw in 2020 won't  compensate growers for lowers yields like it did in 2018.

Winter crop drilling for harvest 2021 has more or less been completed at this stage with some growers planting similar areas of crops to those planted in autumn 2018. However there are still certain areas where drilling progress has been slow due to wet weather and delays in harvesting potatoes and beet, these fields are unlikely to be planted at this stage with winter cereals. While the area of winter cereals planted this autumn will not to be as high as 2018 they will be significantly higher than what was planted in 2019.