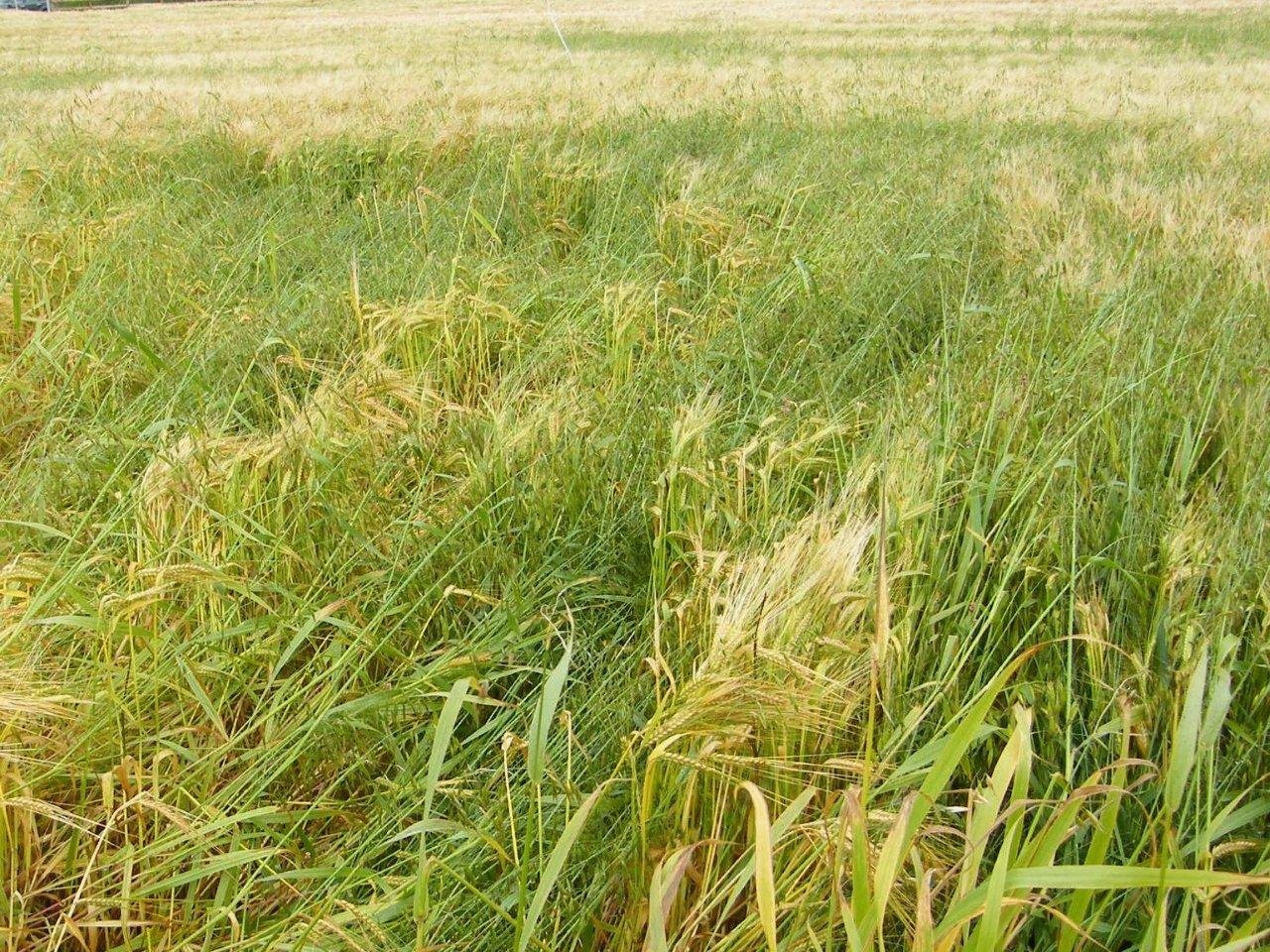 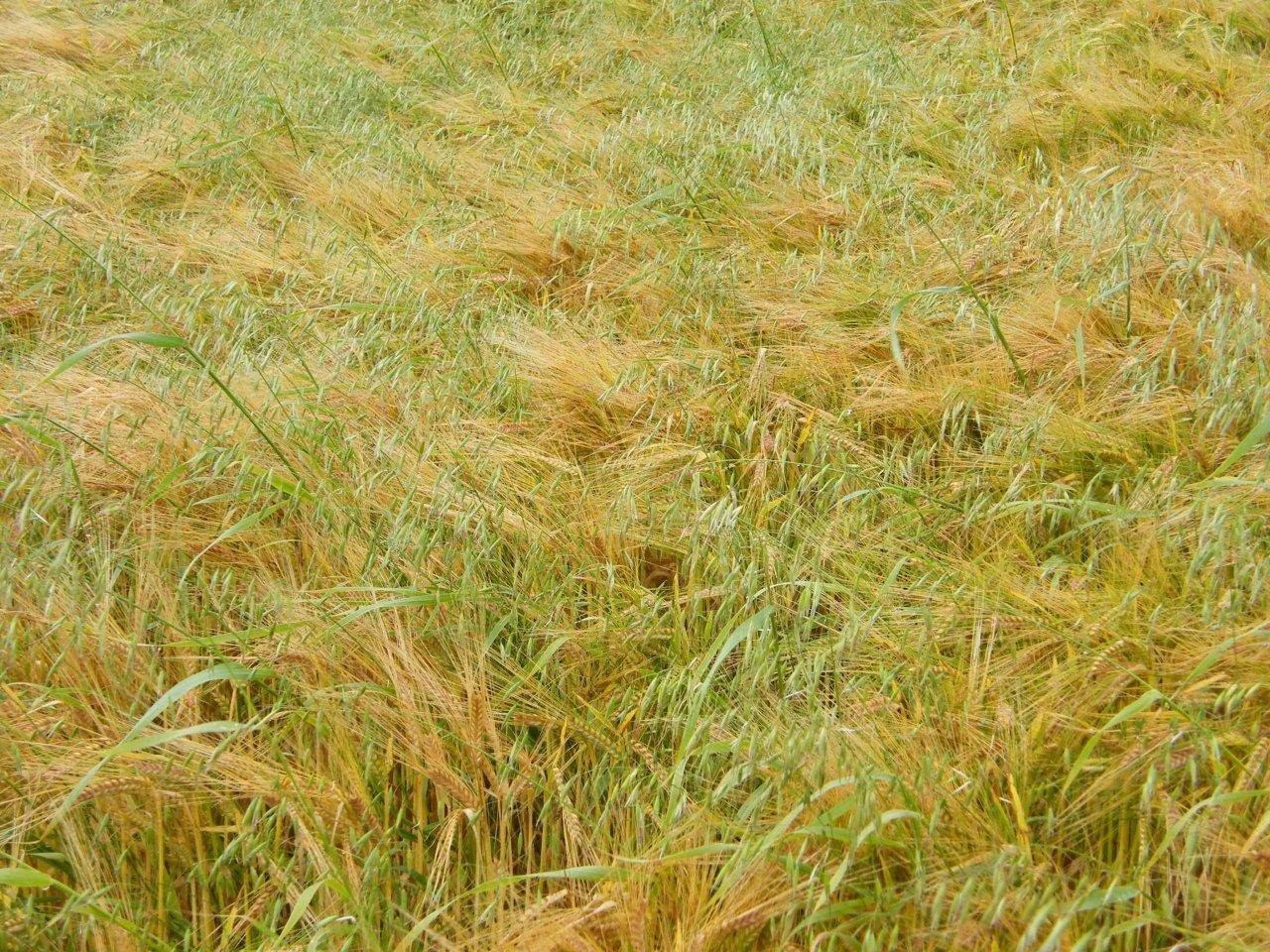 This is the most common type of wild oat in Ireland.

Sterile brome is the most common grass weed of the brome family.  However Soft,  Great , Meadow and Rye brome are present in many Irish fields also.

Correct identification of these bromes is critical to achieving good control.  Each brome has specific identifying characteristics with identification becoming easier when the plant is headed with mature seeds.

Sterile brome is the most widespread weed, found with a range of fertile soils throughout Ireland.

Sterile brome is native and widespread in Ireland. It’s not hard to recognise as its familiar purple, drooping heads are seen towering above cereal crops and around hedges each June and July. It’s an annual grass weed which means a plant must germinate from a seed every year. Its natural habitat includes verges, field headlands and waste ground. It grows freely on waste or cultivated land on well-drained soils. It is competitive in winter wheat and winter oilseed Rape. It can cause a yield reduction in wheat of 2.4% with just 3 plants/m2. It is increasing problematic on arable land that is in continuous cereals especially winter barley where herbicides options are minimal. Brome has no auricles.

Sterile brome from a young plant has a hairy stem and leaves, it has a dense covering of hairs on the stem and leaf surface. It is easy to spot in barley crops due to its twisted slender leaf appearance; it is more difficult to distinguish from wheat crops due to the twisted leaf and slender leaf structure of the wheat plant. The key feature to look for is the hairs on the stem and leaf, a magnify glass is sometimes required to see the hairs especially on young plants. It helps to roll the leaf over your finger and hold it up to the light to see the surface of the leaf hairs.

It must be noted that all bromes have hairs so furthermore identification may be required, if possible finding the seed that the plant emerged from can be a good indicator but it is sometimes hard to differentiate between the different bromes.

The ligule is like a barcode for grass weeds, the ligule of each plant differs allowing for accurate identification. To find the ligule of a plant is quite simple, it can be seen at the stem where the leaf has the left the stem.

Great brome has been found in some areas of Ireland but is not as dominant as sterile brome. However its often underreported partially due to mistakenly identified as sterile brome in some cases. Similar to sterile, great brome is found in field margins, waste ground and roadsides. It usually prefers a sandy soil and dunes.

In population R2, although the ED50 values to both pinoxaden and cycloxydim and additionally, population R3 to cycloxydim, were above recommended field rates, their GR50 values remained below, suggesting a shift towards cross resistance.

While population R4 was the only population, where both ED50 and GR50 for all ACCase inhibitors remained below recommended field rates, but they would not give effective control at these rates, strongly indicating evolving resistance.

This is the first study reporting variable cross-resistance types and levels to ACCase inhibitors in A. fatua from Ireland.

The full results are available here

The ECT project has collected plant seeds from around the country both as part of a large survey of growers and also from concerned industry, agronomists and farmers.

To date, 34 field populations of wild oats have been identified with herbicide (ACCase) resistance, since the first case was verified in 2016. To investigate the linkages between management actions, weed pressure and the incidence of resistance further, a nationwide survey of 145 farms was conducted from June to September 2020 as part of the on-going ECT project.

The survey included a questionnaire, grass weed assessments, and the collection of seed samples for herbicide resistance testing.

Glasshouse studies on 12 populations of sterile brome, identified a larger variation in susceptibility within and between populations to reduced rates of ALS-meso+iodosulfuron (Pacifica® Plus®) or ACCase-cycloxydim (Stratos Ultra®). This may indicate resistance evolution, which will likely accelerate with the repeated use of rates lower than the recommended label rates.

Studies with 14 populations of black-grass indicate the presence of resistance to both ACCase and ALS herbicides. 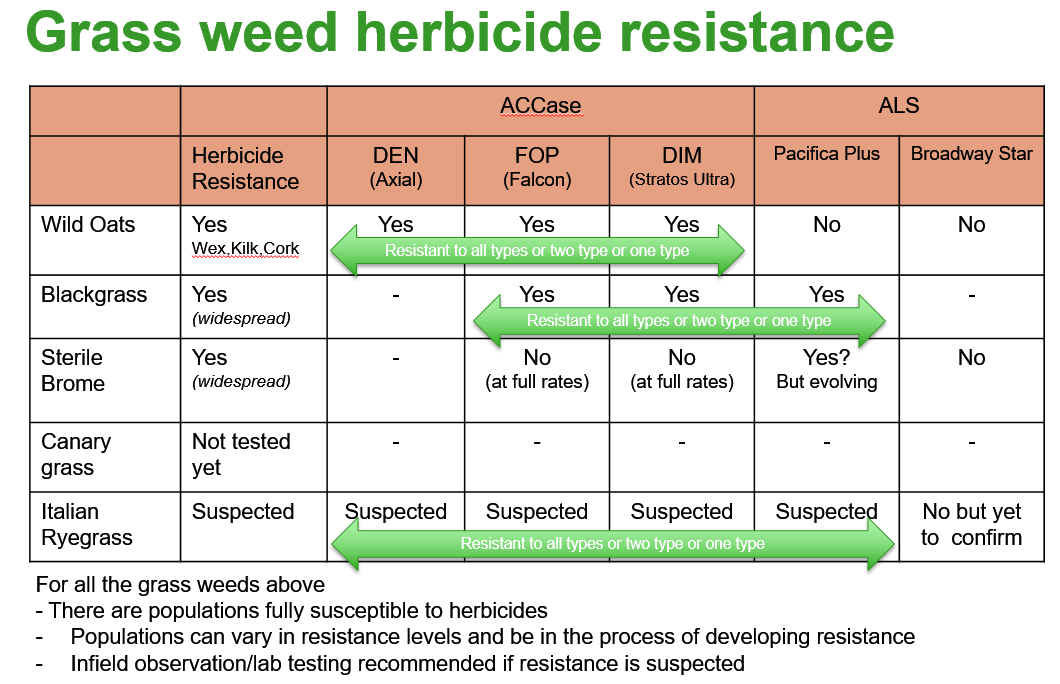 To limit the spread of resistant grass weeds, an integrated management approach with judicious herbicide use (e.g. using label rates) must be deployed to minimise seed return and ensure effective control with a limited herbicide armory remains possible in the future.

Anyone who suspects that they have a herbicide resistant grass weed on their farm can send samples into the Enable Conservation Tillage project in Oakpark. When submitting a sample for testing please fill in the information on the Grass Weed Seed Collection Form and follow the sampling protocol to ensure that the sample provided is suitable for testing.

Arable grass margins are areas from 1.5 - 3 meters between the main crop and the field boundary deliberately managed to (a) provide habitat for flora and farmland wildlife species, (b) add biodiversity value and ecosystem services, (c) protect water quality, and (d) most importantly, compete with problematic grass weeds like sterile  brome, which are increasingly problematic along field boundaries and invading into fields. Control of sterile brome in margins/hedges by total weed control or selective graminicides have controlled competitive  species and allowed bromes to flourish rather than decreasing their incidence. Continuous mowing encourages seeding at lower levels. Teagasc Oak Park have demonstrated that a margin specifically sown with competitive perennial grasses when properly managed, provides competition for the sterile brome by preventing their regrowth, and therefore seed return.  Click on the picture below to read more. 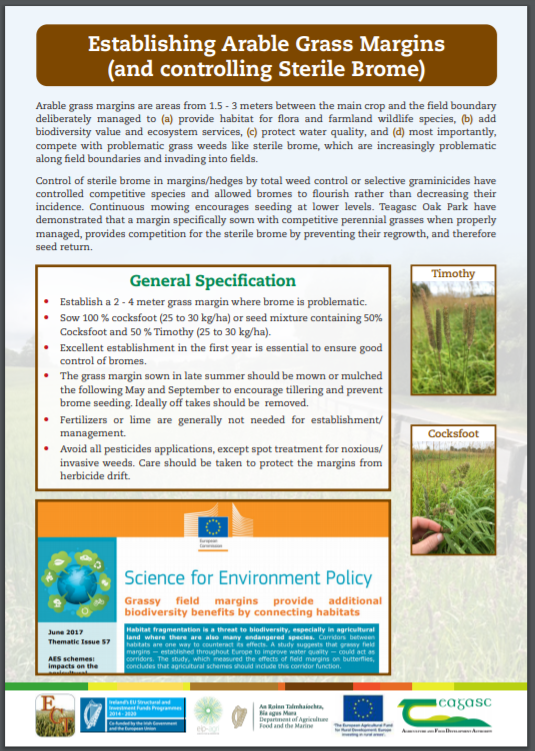